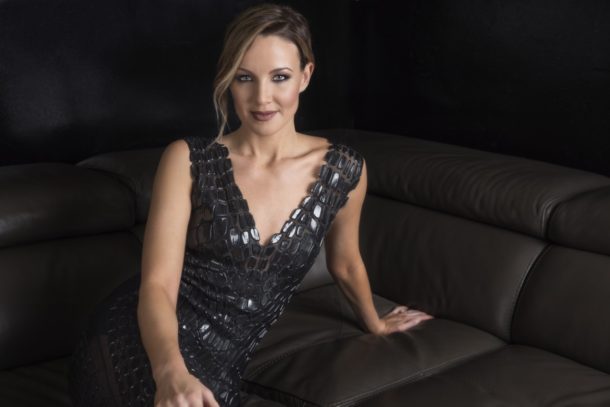 I spoke with Brianne Davis about her role as Lena Graves on SIX, which airs Wednesdays at 10/9c on HISTORY. Brianne talked about her character, her background, the response that the show has gotten, her upcoming projects, animal charities, and so much more. She stars alongside an incredible cast that consists of Kyle Schmid, Walton Goggins, Edwin Hodge, Barry Sloane, Juan-Pablo Raba, Dominic Adams, Nadine Velazquez, and Nondumiso Tembe. Don’t miss a single episode of SIX on HISTORY.

LL:  I’m really enjoying SIX. I spoke with Kyle Schmid prior to the premiere, so what has been the response that you’ve gotten from military families and viewers?

Brianne Davis:  I’m glad you asked me that because we just got some articles back from military wives that do blogs and reviews and they love it. That made me so happy because there are so many military shows that don’t portray the family. The family sacrifices just as much. Nadine and I really try our best to portray these strong and independent women. We really wanted that to be seen. Our response has been outstanding. You put your art out there and you just don’t know how people are going to perceive it. I was nervous about that. I really wanted to do them proud.

LL:  You have plenty of real-life experience that pertains to the show, with your dad having fought in Vietnam, and you fly helicopters. Can you talk about your experience and how that has helped you working on the show?

Brianne Davis:  Coming from a military background, you see the hard side of war. You know that there are certain things that you don’t talk about and you don’t ask questions. I think with the Navy SEALs, and playing a Navy SEAL’s wife, that these wives don’t know where their husbands are going or if they are going to come back. They don’t know what missions they have, and they still try to keep that connection with their significant other. I think watching my mom helped me. She’s a strong independent woman and I think that helped me know her. Flying helicopters didn’t really help my character, but I got to brag to the boys that they’ve never flown helicopters. [Laughing.] That was the best part.

LL:  They had to go through weeks of weapons training and you were ahead of them.

Brianne Davis:  Completely. I went to the shooting range with them, and our technical advisor Mitchell Hall, and I already knew how to shoot an AK-47 and a M16 before they even did. It gave me great bragging rights. I’ve been to Afghanistan and Iraq. I’ve seen the bases and the landscape. In all honesty, doing those two USO tours was one of the best experiences of my life. It was such an honor to go and meet the brave men and women and hang out with them and see their daily lives. It’s a tough, tough profession.

LL:  Do you think that the show does a good job representing them?

Brianne Davis:  It’s different because I hung out with the Marines and the Army, so I didn’t know that much about Navy SEALs when I got the part. I did a lot of research. I talked to this one woman that’s been the wife of a Navy SEAL for like twenty-five years and I got to ask her every question in the book that you would never ask a stranger, or even someone close to you. She answered all of them and I learned a lot. Being in Jarhead, and coming from a military family, it’s really important for me to do an authentic portrayal of these people. I think we did a really fantastic job. It seems like everybody is loving it.

LL:  You play Lena Graves, wife of Joe “Bear” Graves, in the show. In the last episode, we saw them go to the doctor’s office to talk about fertility treatments. That stuff is expensive. I didn’t realize that until I heard the price.

Brianne Davis:  It is expensive. The positive thing is that the military pays for all of their doctor’s bills, but they don’t pay for extended fertility treatments. Yeah, it’s really expensive. I’ve had some friends go through that process. I’ve had so many people in my life struggle having a child that I got to really draw from that experience of listening to them, and asking them questions about how difficult it is.

LL:  Can you talk about what they are going through as a couple?

Brianne Davis: They are high school sweethearts. Joseph is the only man that Lena has ever been with. She’s in love with him. He was from the wrong side of the tracks. She’s from a very religious, conservative upbringing—a military family also. She’s really trying to get her husband back and connect with him. She’s done a lot of her grieving, and you’ll see that. Through the season, you’ll see Lena just grasping to bring her husband out so they can be on the same page again. There are some really beautiful, heartbreaking things coming up for them.

LL:  Do you think it will be over for them if they can’t have a baby?

Brianne Davis:  It could go either way. I think they need to have some really strong heart-to-hearts and Joseph is not where she can do that with the job that he’s doing. It’s like two people being on two opposite sides of the street and they don’t know how to cross it to meet in the middle. We’ll see that. I feel like everybody has their own story. Some people make it and some people don’t. Losing a child is very difficult. It’s heart-wrenching.

LL:  I do like how they add some humor in the show because filming that sample scene had to be hilarious. How many times did you have to film that?

Brianne Davis:  Yes! [Laughing.] There has to be some humor. A good probably ten times. We were cracking up. Barry and I always laugh. We worked really well together, so we just played off of each other.

LL:  I have to commend you on your on-screen running. I know that mastering that is an art form.

Brianne Davis:  She’s a marathon runner. Leslie Linka Glatter, our executive producer who also directed the first two episodes, we filmed it in North Carolina and it was 100 degrees out. She made me do that run down the street for a very long time, and my legs were like jello by the end of the day. I could barely walk. I ran so much and it’s just sprinting, it wasn’t even like a light jog. [Laughing.] We had to do it multiple times and I thought she was trying to kill me, but I love her. I did it.

LL:  Can you talk about working with the cast and what we have to look forward to in upcoming episodes? Are we going to see more of you with the other women?

Brianne Davis:  You are. There’s some great stuff coming up with the whole cast that we shot together. Those were the best days. Honestly, even at the table read, before we even set foot on the set we were an instant family. I’ve never had that happen. I’ve been in this business for fifteen years and I’ve never come to a table read where it was instant. There is this energy beyond all of us. Whenever we got to shoot together it was like playtime. Some of the directors were like okay, seriously stop talking we are about to roll. Immediately, when they said action, we just went into it. Those moments, with the entire crew and cast, are very, very beautiful. We all love each other.

LL:  I don’t know if you can answer this, but could SIX continue or is it just set up to be a single-season miniseries?

Brianne Davis:  We are waiting to hear. I know that the writers have been working on a season two. I think they already have it in their minds, but we are waiting and hoping to find out soon. All of us are so dedicated to the show, and the message, so fingers crossed. I feel like it’s an important show and it’s the history of now—it’s happening now. Let’s hope. I hope it goes through. I feel like the fans love it. We are only on episode two, and it gets more intense every episode. It’s going to be a fun ride.

LL: You are also filmmaker. What do you have in the works?

Brianne Davis:  I’m about to go back on the show Casual on Hulu. It’s a Jason Reitman show that I’ve been reoccurring on for the last few seasons. I’m going to start shooting that in February. My husband created this amazing show and we are starting to pitch it around town to produce. My movie Psychophonia comes out in April on VOD and eOne is distributing it. I’m attached to directed a movie called A Place Apart. We are just finishing getting financing. I have my hands in a bunch of fires and I do whatever comes first. I just applied to the Warner Bros. directing program for television. We’ll see if I get accepted. Hopefully, that happens but they only take twelve people, so we’ll see.

LL:  It’s good to be multi-talented.

Brianne Davis:  I feel like you have to be in this business now. You can’t just wait around for auditions. I don’t get fulfilled that way. I have to constantly be creating like taking photos. I produced three movies and I directed two of them. I just feel like the more you create the more that comes.

LL: Also, I’m sure having a background in filmmaking helps your acting.

Brianne Davis:  It has been an eye-opening experience. I feel like every actor needs to get on the other side. You don’t have to be a director, but just be on the other side somehow. You can see, when you get in the editor’s room, if you don’t hit your mark every time that I can’t cut it as a director. It doesn’t piece together. It’s very eye-opening and has made me such a better actor. I’m more aware of everything.

LL:  I saw on your website that support a lot of animal charities.

Brianne Davis:  Yes. Animal charities are the most important thing to me. ASPCA and Hope for Paws. There were these two dogs that got dropped off in front of our house, just chained and left there. How could someone do that? I can’t fathom. I support and will do anything that I can for the animals. They just give us so much love and we need to protect them.