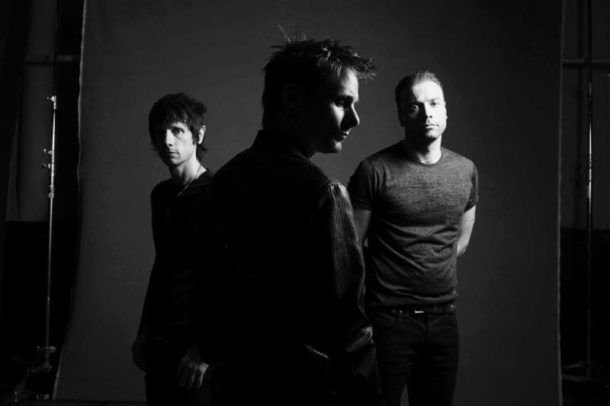 Grammy Award-winning rock band MUSE today announced a tour of North American amphitheaters with worldwide multi-platinum selling band Thirty Seconds to Mars.  Produced by Live Nation, PVRIS will be the support band for the tour which will kick off May 20th in West Palm Beach, FL and wind down September 20th in Salt Lake City, UT.   A Muse fan club presale will start Wednesday, February 8th at 10am local time and run through Thursday, February 9th at 10pm local time.  Fans can pre-order tickets

Muse is Matt Bellamy, Dominic Howard and Chris Wolstenholme. Their last album, Drones, was released in June of 2015 and debuted at No. 1 in 21 countries around the world including their first No. 1 album in the United States.  The album spawned the number one hit “Dead Inside,” and the band went on to win the Grammy Award, their second, for Best Rock Album in February of 2016.  Since forming in 1994, Muse have released seven studio albums selling upwards of 18 million albums worldwide and won numerous awards around the world including: two Grammy Awards for Best Rock Album; an American Music Award; and the O2 Silver Clef presented by Queen’s Roger Taylor and Brian May. They have won press awards for Best Live Act, Best Album and Best British Band, and they have received an Ivor Novello Award for International Achievement.
Thirty Seconds to Mars – comprised of Jared Leto, Shannon Leto and Tomo Milicevic – has sold over five million albums and millions of concert tickets worldwide. The group has received numerous awards, including a dozen MTV awards worldwide, a Billboard Music award, and a Guinness World Record for the Longest Running Tour in history. The band released their critically acclaimed music documentary ARTIFACT on iTunes worldwide where it has been a regular at the top of the charts. It chronicles the band’s legal battles with record label EMI/Capitol/Virgin. They also recently announced their 3rd Annual Camp Mars Festival that takes place every summer in Malibu, CA.  Thirty Seconds to Mars are currently working on their highly anticipated 5th studio album to be released later this year.
Get acquainted with the mysteriously awesome PVRIS before they become the biggest thing in rock. For fans of The Neighbourhood, CHVRCHES, and Paramore, PVRIS are the best thing since sliced bread.” That’s what MTV said about the Boston-based trio of vocalist Lynn Gunn, guitarist Alex Babinski and bassist Brian MacDonald and the band is certainly living up to the hype: over the past few months, they performed on “Jimmy Kimmel Live!,” were spotlighted on “Last Call with Carson Daly,” hit the road with Fall Out Boy and Awolnation for a North American arena tour and were featured on the cover of Alternative Press. That followed a year in which they hit No. 1 on Billboard’s “Emerging Artists” and “Trending 140” charts, played to packed-house crowds around the world and racked up over 12 million total YouTube views and 15 million total streams in the US alone (the latest being more than 14.7 million Spotify streams and 3.4 million views for their “You And I” video).The band is led by 21-year-old vocalist Lynn Gunn, who the Huffington Post described as “a force that cannot be denied.” They’re currently putting the touches on a much-anticipated new album, due out later this year
http://muse.mu/
http://www.thirtysecondstomars.com/
http://www.pvris.com/
Tour Itinerary:

Backstreet Boys release new single and video, sign to RCA Records
Joan Jett and the Blackhearts, Styx to co-headline tour kicking off May 30 with Tesla
Andrew W.K. performs "Music Is Worth Living For" on 'Conan'