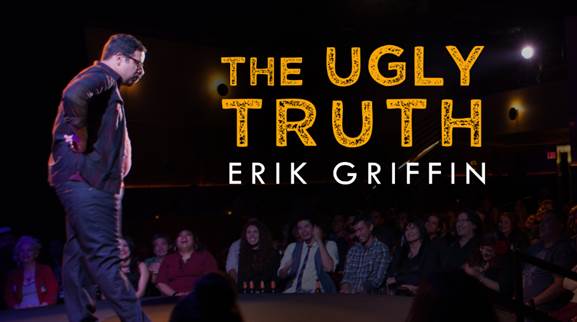 Griffin cut his teeth on the stages of comedy clubs throughout the U.S. and in his first hour-long special, gives viewers a taste of what he does best – make crowds of people laugh uncontrollably. With a sharp wit and even sharper tongue, Griffin deconstructs everything from modern romance and profile pictures to calorie counting and Fatburger in this raucous hour of standup from one of today’s brightest comedic minds.

Griffin is most instantly recognizable to fans from his role on Workaholics. He was also recently seen in the film Mike & Dave Need Wedding Dates. Griffin has appeared on Blunt Talk, Arrested Development, Franklin & Bash and World’s Funniest Fails, and has recorded voiceover for Harvey Breaks. He tours the country headlining popular comedy clubs and colleges every weekend. Griffin also recently released his debut comedy album, Technical Foul: Volume One, as well as his Comedy Central Presents Half-Hour Stand-Up Special.

Griffin is part of a large ensemble cast in the new one-hour SHOWTIME drama series I’M DYING UP HERE, which explores L.A.’s famed ’70s stand-up comedy scene where the careers of legends such as David Letterman, Jay Leno and Richard Pryor were launched. The series delves into the inspired, damaged and complicated psyches of those who stand alone in front of an audience “dying” for fame, fortune and, with any luck, a shot on Johnny Carson. The series stars Academy Award® winner Melissa Leo, Ari Graynor, Michael Angarano, Clark Duke, Erik Griffin, RJ Cyler, Andrew Santino, Al Madrigal, and Jake Lacy. This fictional group of competitive but close-knit comedians is mentored by “Goldie” (Leo), a brassy comedy club owner who rules over her business with an iron fist, but nurtures her comedians with tough love. For Goldie and her crew, there’s truly no such thing as an easy laugh. Produced by SHOWTIME, the series is created and executive produced by Dave Flebotte, and executive produced by Golden Globe® winner Jim Carrey, Christina Wayne and Michael Aguilar and based on the non-fiction book of the same name by William Knoedelseder.

SHOWTIME is currently available to subscribers via cable, DBS and telco providers, and as a stand-alone streaming service through Apple®, Roku®, Amazon, Google and Samsung at www.showtime.com/samsung. Consumers can also subscribe to SHOWTIME via Hulu, YouTube TV, Sling TV, Sony PlayStation® Vue and Amazon Channels. The network’s authentication service, Showtime Anytime, is available at no additional cost to SHOWTIME customers who subscribe to the network through participating providers. Subscribers can also watch on their computers at www.showtime.com and www.showtimeanytime.com.

'Twin Peaks' to be produced as a limited series for Showtime
Showtime to premiere 'Penny Dreadful: City of Angels' on April 26
Gillian Anderson to star as Eleanor Roosevelt in THE FIRST LADY (W/T) for SHOWTIME