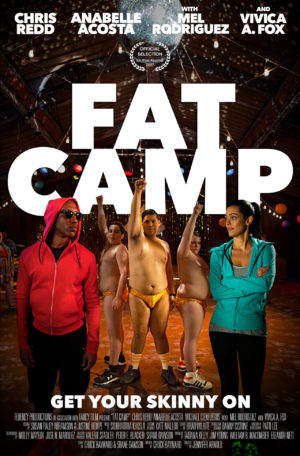 Twenty-something Hutch thinks image is everything. He fronts like a baller and is too spoiled to get a job. But when his mom kicks him out of the house and he’s forced to work at his uncle’s fat camp, he finds himself supervising an offbeat group of husky boys, who ultimately help him grow up.

FAT CAMP is directed by Jennifer Arnold and is written by Chuck Hayward based on a story by Shane Dawson and Hayward. The film is produced by Tatiana Kelly, Jim Young, William B. Macomber, and Eleanor Nett. Valerie Stadler, Peter E. Blacker, and Shane Dawson are executive producers. Cinematography is by Patti Lee with editing by Brad Wilhite. Music by Siddhartha Khosla.

FAT CAMP is a FLUENCY Productions, a division of NBCUniversal Telemundo Enterprises. Aimed at the emerging majority, Fluency is committed to celebrating new heroes and amplifying bold voices.

FAT CAMP will be available on VOD Tuesday, July 25, 2017 on the following platforms: