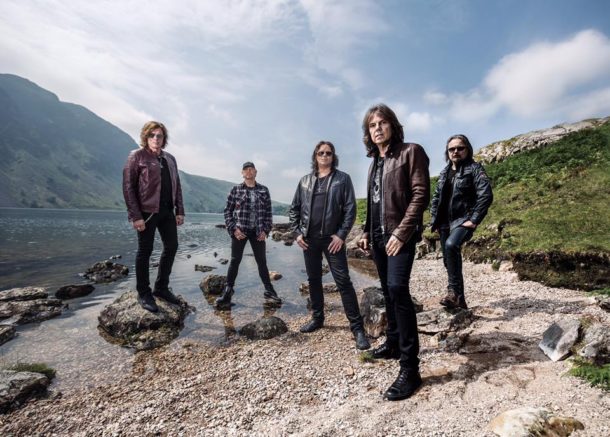 If EUROPE’s 2015 album WAR OF KINGS was the album that made the rock world realize what a formidable act EUROPE had become, then WALK THE EARTH is the album that is set to establish the band as one of the most exciting contemporary rock acts of current times.

From the anthemic sound of the opening track “Walk The Earth” to the heavy vibe that is “Haze,” from the instant melody of “Election Day” to the lyrical content of “Kingdom United,” WALK THE EARTH is the album that should see EUROPE rightly acclaimed as a band at the height of their powers. The wonderful melodies and depth of Joey Tempest’s vocals along with a powerhouse rhythm section and the guitar playing of John Norum, one of the great underrated guitarists. Norum’s guitar playing shines across the record. This is an album that is big in its scope and sound. Much like WAR OF KINGS, WALK THE EARTH is an album that has instant appeal but is also an album that needs to be lived with, in order to uncover it’s depth. The album was recorded at famed Abbey Road Studios in London with Grammy@ winning producer Dave Cobb (Rival Sons, Shooter Jennings, Jason Isbell, Chris Stapleton).

“We’re simply a different band today,” says lead singer Joey Tempest. “Ever since we started up again in 2004, we have constantly explored our limits and new parts of our musical universe. After around 1,000 shows, we feel comfortable just improvising, jamming and pushing our lyrics and songwriting with much more ease. We have now been together recording and making albums longer than the early period of the band. Five albums in the ‘80s and ‘90s. Now six records with WALK THE EARTH. When we started up again in 2004 we all agreed to think ‘long-term,’ to take the long road and build up a new relationship with listeners and media. We all agreed on writing together, owning our music, and license it out to labels that really care and support us in the long run.

“We also agreed to not look back! And never stop looking for that deeper expression. We don’t have much in common with our contemporaries from back then. We have taken a different path, making sure we are constantly moving forward. We have little regard for outside influences and opinions. In order to enjoy this new journey and feel creative, it needed to be completely on our terms.

“In a EUROPE live show, there is of course some room for nostalgia, but in the studio there is none. Every album is a reaction to the one before, a new journey a new adventure. The music of a rock band needs to constantly move, challenge, upheave, evolve or the band will automatically become a nostalgia act. We are proud of our past and previous albums, but we simply can’t identify, recapture, emulate any of it. We simply can’t write like that even if we wanted to. We are a new act with a different expression.

“Over the years, we have learned how important recording techniques and recording equipment is by trying to search and research which producers, engineers and recording studios that can actually inspire and keep us wanting to be adventurous and daring. It has now taken us six albums to get here.”

WALK THE EARTH is now available for pre-order from the links below: