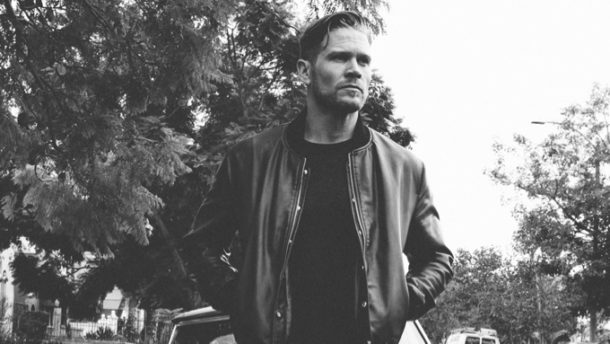 I spoke with Brett Zimmerman about his role as PFC Ronald ‘Red’ Daniels in Call of Duty: WWII, his experience working in the motion capture suit and with fellow castmates Jonathan Tucker and Josh Duhamel, his new VR feature Flesh and Bone, and so much more. Call of Duty: WWII will be available on November 3.

Brett Zimmerman: Yes. Obviously, the characters built out to our likeness so we’ve done everything from voice-over to motion capture. We did a full day of facial scanning, which was an extremely detailed process. We did basically 113 different muscle movements with our face from screaming, yelling, raising an eyebrow—stuff like that where they captured every kind of line within our face. Then they gave us multiple sentences and paragraphs that we would read in different tones, whether it be happy, excited, or angry just to see what expressions would come out throughout the different ways.

Did you work together?

Brett Zimmerman: We did. There were parts of it that were individual like voice-over sessions. I’ve probably done over 50 hours of voice-over just for this game alone. They would bring us in and it would be sessions of doing battle chatter and some lines with no combat, or with heavy combat. Those sessions were us just done individually. Any of the motion capture was us as a squad.

Was it difficult getting used to the motion capture suit?

Brett Zimmerman: Let me tell you the suit, as funny as they look, you kind of get used to that and learn to live with it. You can’t make fun of it. You are out there as an actor and you can’t lose sight of that. The hardest part, hands down, was the helmet cam. I don’t know exactly how much they weigh but they are extremely weighted. Day one, they said that it was going to be challenging if you haven’t done motion capture. The head cam shines right between your eyes, so your line of sight is somewhat held back and you have to learn how to look around that. I essentially placed myself as if I were a soldier running around the field. I felt that weight of what that helmet might be like. I tried to use that in my performance.

Do you have any funny stories that you can share?

Brett Zimmerman: There were plenty that happened on set. I heard from a lot of the creative team and crew that throughout each installment every cast is different. They were saying how amazing it was to see us come together as friends. It throws weight to the scenes that we are shooting because it is the history of WWII and we are trying to respect that. We became a squad and everyone was joking around. Jonathan Tucker and Josh Duhamel are both big kids in adult bodies. [Laughing] They were great to work with. They are both so talented. The difficulty in motion capture is that once we started a scene we had to run all the way through. We had to hit our marks and our dialog. If we had a bunch of people running around in the 60×30 volume stage than that was a lot to encompass. A lot of what we dealt with was wearing motion capture suits that contained Velcro, so if it’s a scene where I have to walk up and hug Jonathan Tucker, who played my best friend, our dots would get transferred or we would get stuck to each other and they would have to restart the take. Things like that were pretty funny.

I’m not sure if it’s going to be in the game, but there was a structure that was built as if we were in the back of a big truck and this huge explosion goes off. Josh, being the superior in the game, he was supposed to be the first character out. He has to literally leap over this side railing of a truck and when he jumped out he slipped. He said shit as loud as he could. There is so much realism to it because there is so much going on around us. He dropped his gun and one of us picks it up and they just let it run through because it was so real. The creative team said they they may actually go with that. Things like that helped to make light of filming, but we definitely had a lot of fun.

How does the production compare to film or television?

Brett Zimmerman: I’ve done both TV and film and the best way I can describe it is that it’s a bit of both with a blend of theater because the stage that we are working in is so expansive and imaginative. We don’t have the beaches around us or the bunkers that we’re diving into, or the actual truck beds. They build out levels the best that they can to give us staging to work from. It is very imaginative, especially running around in this funny Velcro dot suit. The production value that goes into it, it’s a multi billion dollar game. They put a lot of love into each game. From what I’ve seen, it’s more cinematic than games have ever been. The first day I sat down with the team and they showed me what they wanted to shoot, when I knew what we were going to create, it definitely became special to me.

What are some of the highlights of the new game?

From talking to players, and certainly the creative team, they mentioned that Call of Duty, being one of the greatest grossing games year-to-year, one bit of feedback that they’ve gotten was that some players were losing the sense of story. While the graphics were great they weren’t connecting as strongly as they could. Since this is WWII, they brought in a historian who runs the WWII history museum in New Orleans. They brought him on to bring as much truth to the story of WWII, the places, allies, the sounds of all the weapons involved—they went to a sound engineer and recorded the firing and the reloads. I grew up after that error but it was educational and took me back to WWII to rediscover some of the facts. I think a lot of the players will love the story that was created and connect with it. It will be able to memorialize some of the stuff that happened at the time. I know that players are saying that Sledgehammer Games and Activision bringing boots back to the ground is what’s exciting them the most because it’s not so futuristic.

What are some of the best and worst movies inspired by video games?

Brett Zimmerman: This past year the world of Warcraft came out. When I see a film that’s created like that, with all the work that goes in, while the reviews weren’t great I have to give credit to the teams that take chances. That’s a huge game and you can never discredit everything that they put into it—the special effects, the makeup. I’ve always been a huge James Bond fan and when I played in college, GoldenEye 007 was one of my favorite games. Halo has been a big one that I played and since then creative teams have started to create Halo films. As far as I know, Activision themselves have opened up their own TV and film studio to start creating more cinematic features outside of their games.

Is there a special gaming etiquette for actors that are actually in games? Are you not allowed to play your own character? [Laughing]

Brett Zimmerman: [Laughing] I don’t believe that there is. If there is, I know I’ll be breaking it because I can’t wait to play. I’ve caught trailers but I haven’t seen the game unfold. I do think it will be enjoyable. There is a difference in playing it because you have to play it at your own pace. I do think there is going to be some excitement in it. I have plenty of friends and family that can’t wait to play.

What other projects do you have coming up?

Brett Zimmerman: This year I did my first motion capture project with Call of Duty and I also did my first VR project, which I just wrapped. It was for a boxing film Flesh and Bone. It’s produced by Jaunt. Jaunt and Oculus are two of the biggest innovators for virtual reality. They produced this boxing film where I played the lead Charlie. Charlie is essentially grounded by two loves—his life-long love Stella and his love for boxing. In life, we all find outlets and for Charlie that was boxing. It helped him focus so much of his emotions—his rage, sadness or just the conflict of finding goals. We shot it all in VR and the director I worked with wanted to create a story and not just an experience. He found very specific ways to create these amazing transitions from me being in the ring to capturing flashbacks that would take you to another scene. I think, for one of the first times, you’ll be able to truly live through and not just an experience a story in virtual reality. It won’t be cuts of black, it will be transitions that will take you from scene to scene. Our goal is to get it in the 2018 Sundance Film Festival. Jaunt and Oculus have had tables there in the past to display their work.

Call of Duty: WWII will be available on November 3.