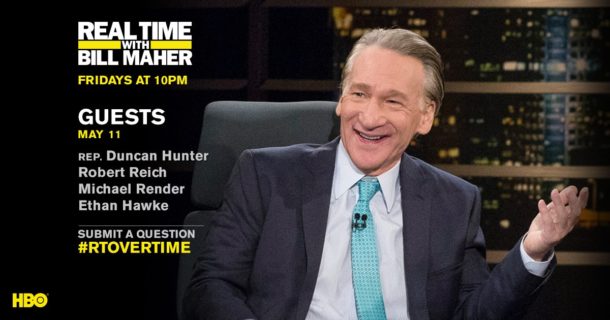 REAL TIME WITH BILL MAHER continues its 16th season FRIDAY, MAY 11 (10:00-11:00 p.m. live ET/tape-delayed PT), with a replay at midnight, exclusively on HBO. Allowing Maher to offer his unique perspective on contemporary issues, the show includes an opening monologue, roundtable discussions with panelists and interviews with guests. Republican Congressman from California, Duncan Hunter, is the top-of-show interview guest. Actor Ethan Hawke is the mid-show interview guest. The roundtable guests are former United States Secretary of Labor and professor at University of California, Berkeley, author Robert Reich, and activist and rapper Michael Render (aka Killer Mike).