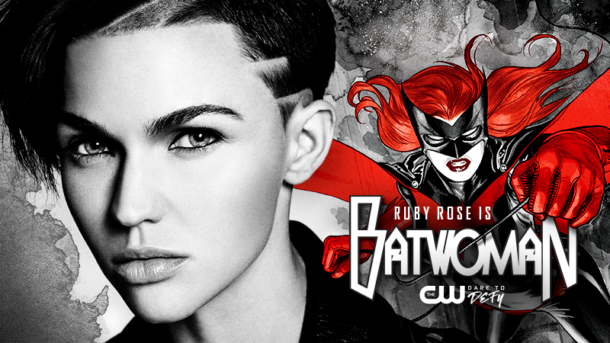 Ruby Rose has been cast as “Batwoman” to appear in The CW’s DC Crossover Event in December. As previously announced, the BATWOMAN series is in development for the 2019-20 season.

Armed with a passion for social justice and a flair for speaking her mind, Kate Kane soars onto the streets of Gotham as Batwoman, an out lesbian and highly trained street fighter primed to snuff out the failing city’s criminal resurgence. But don’t call her a hero yet. In a city desperate for a savior, Kate must overcome her own demons before embracing the call to be Gotham’s symbol of hope. Based on the characters from DC.

A unique and emerging talent quickly on the rise, Ruby Rose is an award-winning actress who challenges herself with each new role and continues to evolve with each project she takes on.

Rose garnered the attention of audiences for her breakout role as a series regular on Netflix’s hit show Orange Is the New Black. In June 2015, the actress made her debut in the third season of the show as “Stella Carlin”, an edgy inmate whose charisma catches the eye of “Piper” (Taylor Schilling). In 2016, Ruby won a Screen Actors Guild® Award for “Outstanding Performance by an Ensemble in a Comedy Series” for her role on the show.

On August 10th, she can be seen in the Warner Bros. action film The Meg based on Steve Alten’s 1997 novel “Meg: A Novel of Deep Terror.” The Meg is centered on an international underwater observation program, led by Chinese scientists, that comes under attack by an unknown danger. With its deep-sea submersible disabled and trapped at the bottom of the Mariana Trench.

Rose’s additional acting credits include the indie film Around the Block in which she starred alongside Christina Ricci, which debuted at the Toronto Film Festival in September 2013. Ruby also appears in Sheep’n’Wolves, an animated feature, which tells the story of a magical land where a flock of sheep find their carefree days interrupted by a pack of wolves who move to a nearby ravine.

In 2015 Rose also wrote, produced, and starred in the short film Break Free, a tribute to gender fluidity that became a viral hit, garnering more than 25 million views on YouTube.

Rose is a fervent supporter of many charities, including the causes closest to her heart, such as Anti Bullying, Women and Gay Rights, Animal Welfare and Youth Mental Health. Rose was most recently awarded with the Stephen F. Kolzak Award at the 2016 GLAAD Media Awards, which is presented to an LGBT media professional who has made a significant difference in promoting equality and acceptance.

She currently resides in Los Angeles.