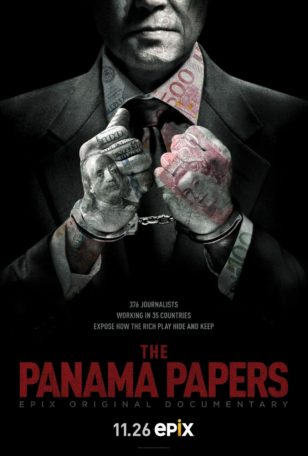 “I am thrilled and honored to be working with EPIX again to tell this story. The Panama Papers strikes at the heart of the issues of corruption and inequality, which is an especially important story in our current political climate,” said Winter.

The Panama Papers strikes at the heart of the biggest themes of our times; income inequality, whistleblowers and corrupt power-brokers manipulating world governments and big business.  The Panama Papers is produced by Robert Friedman, Alex Winter and Glen Zipper and is Executive Produced by Laura Poitras and Charlotte Cook.

Prolific filmmaker Alex Winter last collaborated with EPIX on the multiple award-winning documentary Deep Web, which, following its EPIX premiere, opened as the #1 documentary on iTunes when it went wide in September 2015.  Winter has recently completed two short documentary films for Laura Poitras’s Field of Vision; Relatively Free and Trump’s Lobby.  He is now completing the documentary feature Trust Machine: The Story Of Blockchain for SingularDTV and Futurism Studios. His next project is Zappa; the first all-access documentary on the life and times of Frank Zappa. The Kickstarter campaign for this project was the highest funded documentary in crowdfunding history.

Producer Robert Friedman added, “As a filmmaker, Alex captured both the intrigue and drama of one of the most compelling stories of this decade, providing a unique and inside look at the heroic journalists involved in the Panama Papers.”

Friedman’s recent projects include the Emmy Award winning GIVE for NBC, the feature documentaries Spring Broke on Showtime, We the People: The Market Basket Effect, HBO’s Paradise Lost, Sundance’s Iconoclasts, Under African Skies for A&E, the upcoming four-part docu-series The Preppie Murder for Sundance and the Clive Owen feature film The Confirmation.

“Collaborating with Alex to tell this story at such a volatile moment in American history felt like going on a mission. I can’t wait to share this film with the world, and look forward to the important conversations I know it will engender,” said Zipper Bros. Films founder Glen Zipper.

“Field of Vision is thrilled to collaborate with Alex on The Panama Papers. It is a vitally important story about the hidden world of international corruption, and the real world risks that sources and journalists are willing to take,” said Laura Poitras.

Laura Poitras’ film CITIZENFOUR won an Oscar for best documentary, as well as awards from BAFTA, Independent Spirit Awards, and the Directors Guild of America. The first film in her post-9/11 trilogy, My Country, My Country, was nominated for an Oscar. The second film, The Oath, was nominated for two Emmys. Her reporting on NSA surveillance received the George Polk Award for National Security journalism, and shared in the 2014 Pulitzer Prize for public service.

Alex Winter entered show business as a child actor with co-starring roles on Broadway in THE KING & I and PETER PAN, and came to prominence in movies such as Warner Bros’ hit THE LOST BOYS and the wildly popular BILL AND TED franchise. Winter has directed three narrative features: cult classic FREAKED for 20th Century Fox; FEVER, for Lionsgate, which screened at Cannes; and SMOSH: THE MOVIE, which opened in 2015 as the #1 comedy on iTunes.

Winter’s VH1 Rock Doc DOWNLOADED premiered at SXSW in 2013 and earned worldwide critical acclaim at theatrical and festival screenings. Winter’s latest, multiple award-winning documentary DEEP WEB, had its world premiere at SXSW and a broadcast premiere in the U.S. on the Epix network alongside a global festival tour. The film went wide on September, 2015, opening as the #1 documentary on iTunes.

Recently completed are two short documentary films for Laura Poitras’s Field of Vision; RELATIVELY FREE and TRUMP’S LOBBY. Winter is now completing two new documentary features; TRUST MACHINE: THE STORY OF BLOCKCHAIN for SingularDTV and Futurism Studios; and THE PANAMA PAPERS for the EPIX Network, executive produced by Laura Poitras. His next project is ZAPPA; the first all-access documentary on the life and times of Frank Zappa. The Kickstarter campaign for this project was the highest funded documentary in crowdfunding history.