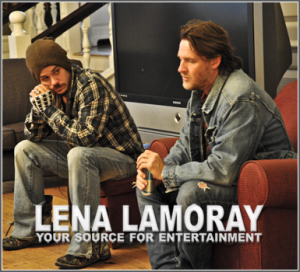 I had the pleasure of finding out just how amazing Donal Logue and Michael Raymond-James are in the flesh when they stopped by Harvard University to promote their new show on FX Networks, Terriers. They are two of the nicest people that I have ever met and it wasn’t because they were trying to sell the show to me because they were aware that I was sold on Terriers after seeing just the pilot episode. I truly love the show and everything about it. The cast is phenomenal and includes Donal’s real life sister, Karina Logue who does a superb job playing his on-screen sister, Steph. Last week’s episode, “Missing Persons” featuring Karina was heartbreaking and I hope we get to see her again.

Donal and Michael are taking it upon themselves to expose as many people as possible to their show so they set out on the Terriers bus tour. No one ever comes to my area and I was disappointed I could not make it to the Terriers red carpet premiere in California last month so when I found out that they were stopping by a local university, I had to attend the screening. I am a huge fan of the show and I was able to speak with them last month about their roles as Britt and Hank and they were so much fun to converse with. I figured the event at Harvard would be a screening of an episode and then a quick question and answer period and maybe a chance for a photo op but what they shared with me was more than I could ever ask for. I had already seen the episode and Donal and Michael were outside taking pictures for the local paper so I figured I could get a few photos for my article and Michael came over and signed my press kit and he remembered speaking with me, which was pretty crazy. I am actually very shy and was taken by surprise but at least it was windy and cold outside so I don’t think anyone could tell I was blushing. What a great couple of guys. In my line of work I have met and interviewed a ton of actors and musicians and never have I came across people so incredibly sincere as Michael and Donal. Sometimes I don’t want to meet the stars of my favorite shows, movies, etc. because it can be a real letdown if they are douche bags. Case in point, I met one of the stars of one of my favorite horror movies of all time and to say that he was an ass is putting it nicely. I watched him blow off his fans that were waiting in line to meet him saying he didn’t have time for them and then he sat in the corner and read a newspaper. Um, yeah, fantastic way to treat your fans! Michael Raymond-James and Donal Logue were nothing like that in person. They were so pleasant to be around and did I mention how extra handsome they are in person? If you think they are a sexy duo on-screen just wait until you get a chance to meet them! They even invited me on the Terriers tour bus and what a great smelling bus it was. Tour buses usually smell, “of man” as many bands have put it, but not this one. These boys are super clean and fresh. 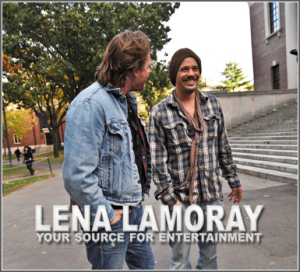 Donal attended Harvard and you could tell that he was excited to be back on his former stomping ground so he welcomed me to come along on his tour with Michael. He took us to where he used to live, recommended landmarks, gave us a history lesson and so much more. Donal was happy to be back in Cambridge and I thought it was the sweetest thing to witness his enjoyment and knowledge of the area. I could listen to Donal talk about cathedrals and gargoyles for hours. The only thing that could have made this day any better was the incorporation of a squirrel into my photos, I tried but that could have ended poorly for all parties involved, but wait, Donal shared a real fun squirrel story, so they day was complete. Donal is positively brilliant in every way and I will admit I was a bit star stuck because not only is Terriers one of my favorite shows, Grounded for Life is one of my all time favorite shows so being in the presence of Sean Finnerty was a tad bit awesome, to put it lightly. The only person missing from the party was Kevin Corrigan, Uncle Eddie from Grounded for Life. Kevin occasionally pops up in one of my other favorite shows, Fringe.

Michael was so much fun to hang with and it is impossible to be around him without smiling. He just lights up the room and has one of the best attitudes. You know he is the life of every party! I don’t know how to explain it but he is so pure and full of artistic ambition. I’ll be honest, I have never seen an episode of True Blood but now I want to because I am a fan of Michael’s work on Terriers. I heard that he plays a nasty serial killer on True Blood, so that I have to see because that is so far away from his role on Terriers and who he is in real life. Now that I think about it, he would make the perfect serial killer because no one would see him coming. I would have totally fallen for him and gotten myself murdered. Michael is just such a sweet person and such a natural talent. I love that at the conclusion of the episode, “Ring-A-Ding-Ding,” the episode that they screened, where Katie cheats on him that he commented on how upset he was that she cheated on him. It was great to get an in person comment on something that is never supposed to be revealed. Seriously, how could Katie cheat on Britt? 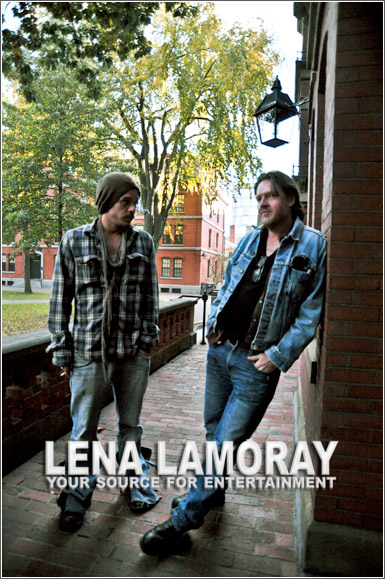 After the screening Donal and Michael answered questions regarding the series, acting, life at Harvard and life in general. They both gave the students incredible advice and pointers about getting scripts to the right people. They encouraged the students to keep on working hard because you can’t expect things to just fall in your lap. They discussed their journeys into the industry and Donal mentioned having to keep it together because no matter what is going on in your personal life you have to stay focused and deal with the “chickens in your bathtub” (a scene from Grounded for Life).

They were so personable and made everyone feel welcome. They took the time out to take pictures with their fans. They even gave out Terriers shirts. I even got hugs, so yes that is how sweet these boys are! Terriers is such a fantastic show and if you have not seen it start watching it now so we can get more seasons. It is a rarity to have a show that hits the right notes all around in writing, acting, directing and everything in between. I loved and supported Terriers before meeting Donal and Michael and now that I found out for myself what remarkable human beings they are it makes it that much better. Thank you, Michael Raymond-James and Donal Logue for such an exceptional experience and show. Watch Terriers on FX on Wednesday nights and support the most incredible people that will ever grace your television set.