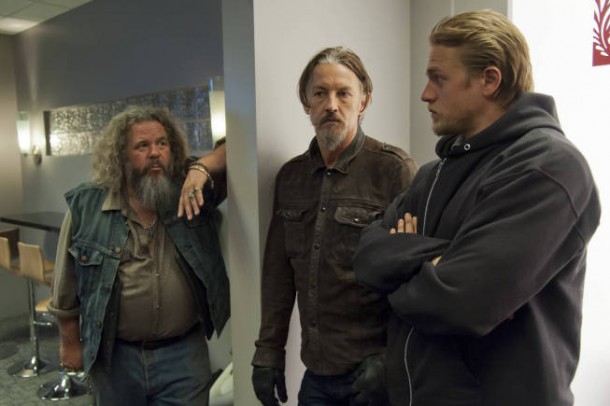 Last week, Sons of Anarchy treated us to a premiere that we will never recover from and I have to say, that is exactly how you write a premiere.  There is no way that anyone who caught last week’s episode is not retuning this week.  This show is famous for grabbing hold of you and not giving you the option to get away.  I think it’s pretty funny that some of the people who say they no longer enjoy the show have yet to call uncle and release themselves from the world that is no longer entertaining them.  Move on then, there is nothing here for you or are you too ashamed to admit that you are still being entertained?  Life is too precious to waste on bad television so if you are tuning in to Sons of Anarchy, then you are truly living.  “Authority Vested” – Jax and SAMCRO are challenged as past sins resurface.  Written by Regina Corrado; directed by Peter Weller.

Has Nero Padilla (Jimmy Smits) piqued your interest?  Everyone wants to know more about him and why he is helping out.  They can certainly thank Gemma (Katey Sagal) for that one.  So far, Nero is my favorite character this season.  He’s witty, fun, and caring.  When Nero and Jax spend some time together they quickly learn that they have so much in common.  I hope that he is here to stay and able to get out a bit more.

It’s obvious who was responsible for breaking into Gemma’s house but the bigger question is who do you think put them up to it?  I have my suspicions.  Poor Unser (Dayton Callie) just can’t catch a break. 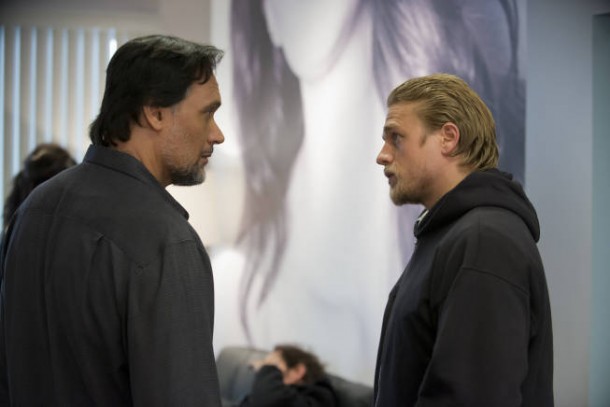 This season has not started out in Tig’s (Kim Coates) favor.  Could you imagine having to watch your child die like that and for your sins?  Tig is never going to be the same.

Jax (Charlie Hunnam) knew that being president wasn’t going to be easy but he took the title and all of the tribulations that accompany it.

What did you think of Pope (Harold Perrineau) and August (Billy Brown)?  How far do you think Pope is willing to go?  Do you think he will go after Tig’s other daughter?

Tara (Maggie Siff) utters two little words under her breath that really let us know where she is at, at this point in her life.  It may not seem like a lot but those words are a reflection of her soul.

Clay (Ron Perlman) just doesn’t know when to give up and poor Bobby (Mark Boone Junior) is stuck in the middle.  I’m so happy that Bobby didn’t have to spend the entire season in jail.  Not only does he get to spend his time shaking his gorgeous hair as a free man, he is the new VP.  All of the jokes at Comic-Con make sense now.  When Mark ambushed Charlie’s interview to add his two cents in about the presidency.  Is it really a “ridiculous fantasy” now?

Jax will make you giggle with one word tonight.  Even with everything going on around him, he steals the scene.   Chibs (Tommy Flanagan) also has a very special moment in the spotlight.  Oh how I love that accent.

The highlight of this episode is a very special wedding.  The sad part is that Tig is certainly not in the mood to lace up his dancing shoes.

This season has started out so strong.  Say what you want about Sons of Anarchy but one thing it has over other shows is consistency.  There hasn’t been a forgettable season yet.  Yeah, I’m looking at you True Blood season five.  How I wish I could just get you washed from my brain.  I could use some of what Gemma indulged in last week.

Do not miss Sons of Anarchy on FX tonight.  The episode was directed by the magnificent, Peter Weller.