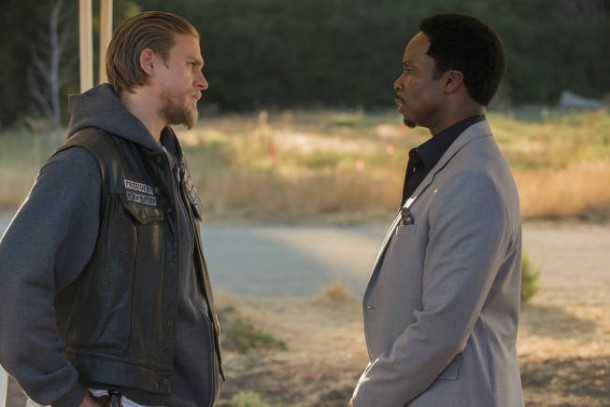 Last week on Sons of Anarchy we met Donal Logue’s character and tonight we will get a proper introduction.  Jane’s Addiction fans get excited because Dave Navarro also has a guest-starring role that begins tonight.  If that isn’t enough for you the legendary Peter Weller directed tonight’s episode. “Darthy” –Jax makes arrangements to take the club in a different direction.  Written by Chris Collins and Kurt Sutter; directed by Peter Weller.

I can’t believe that the end is near.  Every character has been operating without a net this season and sometimes no one is there to catch them.

Jax (Charlie Hunnam) has a plan but will he be able to carry it out successfully?  What did you think about Bobby (Mark Boone Junior) going over to Clay’s (Ron Perlman)?  So many questions have been asked but there are no easy answers.  Jax is finding it difficult to lead without becoming what he has despised the most.  We have certainly witnessed the “savage” side of Jax and it is only going to get worse. 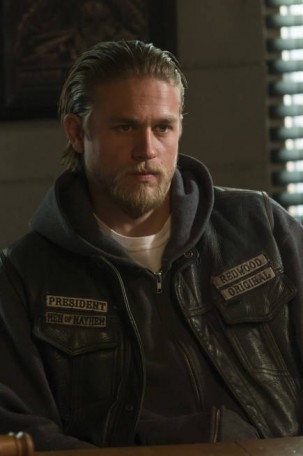 Tonight decisions will be made and issues will be brought to the table.  We see a faint hint of humility and perhaps a little remorse from an unlikely person.  It’s a beautiful thing.

Tara (Maggie Siff) puts things in perspective when she is asked a really difficult question for which there is no easy answer.

Jax meets up wit Pope (Harold Perrineau) and the best thing about that is that we get to see August (Billy Brown).  Pope may be a lot of things but even he knows when to draw the line. “We all can’t be all things.”  Do you think Jax will deliver Tig (Kim Coates) to him?

Tonight we meet Nero’s (Jimmy Smits) cousin, played by Dave Navarro.  I hope we see more of him next week.

Chib’s (Tommy Flanagan) tries to defuse a situation but is anything simple in Charming?  There are drama grenades all over the place.

Donal Logue’s character’s intentions and motivations are made clear.   He wants some blanks filled in and he is not messing around; just ask Otto (Kurt Sutter).  I loved seeing him in that intense scene with Otto last week.  Donal is one of the best actors out there today.  He owns every role that he takes on.  I can’t wait to see him in Vikings with Travis Fimmel.

Tonight’s episode puts everything out there and exposes truths for what they really are; beautiful lies.

Do not miss tonight’s extended (set your DVRs accordingly) episode of Sons of Anarchy, “Darthy,” at 10 EST, only on FX.