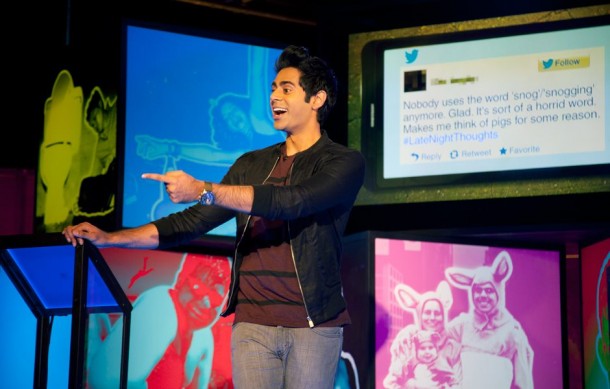 I spoke with Hasan Minhaj, host of MTV’s Failosophy.  Failosophy is a studio-based panel show featuring the Internet’s biggest fails.  It premieres tomorrow night, Valentine’s Day, at 10:30 on MTV.  You have to check out Hasan’s sketch group, Goatface Comedy.  They have something for everyone.  If you need help wrapping your junk, Goatface can help you.  How about Indian Spider-Man?  They seriously have everything.  Hasan will also be posting some new stand-up dates on his site.  Hasan is hilarious and it was a pleasure to speak with him.  Follow him on twitter @hasanminhaj.  Don’t miss the series premiere of Failosophy.  February 14th on MTV.  www.hasanminhaj.com

Lena:  I’ve been on your site enjoying all of the Goatface videos.  Wasn’t “Girl” (by Das Racist) used in a commercial?

Hasan Minhaj:  Yes, it was used in a Kmart commercial.

Lena:  The PopChips ad with Ashton Kutcher, was that seriously a real ad?

Hasan Minhaj:  That was a real ad.  PopChips took that ad immediately down.  Within one day the Internet rallied up.  That was one of the coolest things to see, to see people take a positive stance on a cause.  A lot of times, the Internet is filled with people who write mean comments about other people.  There are a lot of trolls on the Internet.  It was good to see people rise up and do a positive thing.

Lena:  WOW!  I still can’t believe that was a real ad.

Hasan Minhaj:  My thing was how does that get made?  As a person working in this town, there are so many groups to go through just to get something made; there is the producer, the director…  The fact that that got made, I was like WOW.  All the people in the room were like ah-ha, yeah, that’s appropriate.

Lena:  That was awful.  Speaking of videos, you need to promote the video on “How 2: Apply a Condom” again for Valentine’s Day.  [Asif will show you how to safely apply a condom.]

Hasan Minhaj:  Oh yeah, we should totally do that.  That “How 2” segment is a popular one.  What we were trying to make fun of, in that video, is just the whole notion of like a lot of times on the Internet there are these how-to tutorials and we thought it would be really funny if we shot it like a real how-to tutorial and it would be about 87 steps too long and it would be a really bad idea; it wouldn’t work at all.

Lena:  Your new show, Failosophy, is premiering on Valentine’s Day on MTV.  What can you tell me about the show?

Hasan Minhaj:  Yeah, it’s exciting.  It’s on Valentine’s Day at 10:30.  Failosophy is basically a half-hour, studio-based panel show where we dissect the one thing that is consuming our lives, social media.  We break down the funniest Internet moments.  If you’re a fan of Reddit or text message fails, that’s exactly what we talk about on the show.  There are a lot of clip shows on the air right now, which is great to see people rally behind these shows about the Internet.  What’s great about Failosophy, in particular, is that it focuses on user submitted and generated content like really crazy prom photos.  I don’t know if you remember it from high school but there are pictures of awkward teenage guys not knowing what to do with their hands while taking pictures with girls.  We have really funny photos and weird photo bombs.  We play this awesome game called “Date, Roommate, 911” where we look at really crazy Facebook photos and I ask the panel which person would you date, which person would you room with, and which person would you call the cops on.  You’d be surprised by some of the panel.  The people that they would be down to date are pretty interesting.  We have a segment called “Social Notworking” where we just break down people’s dating profiles.  It’s so funny when you read someone’s about section on Facebook and it says “I love Jesus” and then their latest status update says, “Someone cut me off on the freeway and I’m going to eat their babies.” Stuff like that happens on social media all the time. 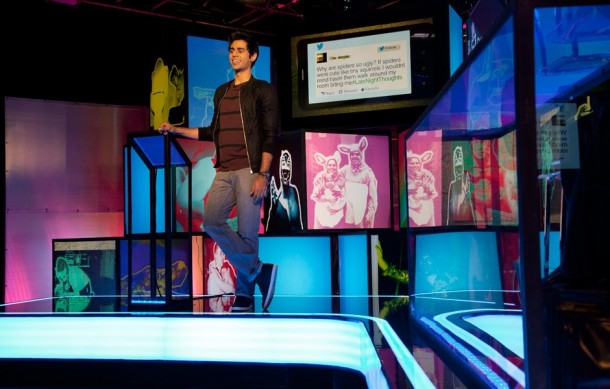 Lena:  Do you get any say on the topics that you cover?

Hasan Minhaj:  Yeah, we have such great writers on the show so when we were preparing for the show we had so many segments.  Only 22 minutes airs and we shot every segment to be about 40-45 minutes, so I got to go in on some really funny topics.  One of the topics that is going to air is text message fails between moms and their children.  I don’t think the iPhone autocorrect feature was designed for moms.  One of the messages that we found was when this mom was texting her daughter, “Hey, how is our pregnant daughter?”  And the daughter responds back, “Oh my god, mom, how did you know?”  She was like, “No, I meant precious, not pregnant.”  There was this girl’s dating profile that was like, “I’m the girl your ex-girlfriend hates, your mom talks about, and everyone at school wants to be with.”  When you check her about me section on her page it says, “Hi, I’m Daisy.  I’m eleven-years-old.”  Holy crap, no wonder you’re the girl we will never forget.  She’s the girl that will end up on our permanent record.  You’ll end up on To Catch a Predator if you date me.

Lena:  Are you going to be live-tweeting with your fans when the show airs?

Hasan Minhaj:  Yes!  We are going to be live-tweeting on Valentine’s Day on the MTV Twitter handle.

Lena:  Who are some of the guests that are going to be joining you?

Hasan Minhaj:  We have a lot of cool guests like stand-up comedians.  We have comics from MTV and MTV2 shows, and other MTV personalities.  We also have a really funny team of comedians.  It’s so awesome to get to do this show in front of a live studio audience with a bunch of people that I’ve come up with in comedy clubs.  I think the trailer really shows that atmosphere and how much fun it was being on the set.  I can’t wait until people get to see the show.  We had a blast.

Lena:  Do you know how many episodes are going to air?

Lena:  What are some of your favorite celebrity fails?

Hasan Minhaj:  Besides the Ashton Kutcher PopChips ad where he decided to wear brownface and failed?  Have you seen this latest Internet meme?  First off all let me say this, I’m a huge Jay-Z fan.  Have you seen the Beyonce photos from the Super Bowl halftime show where she looks like she is turning into The Incredible Hulk?  That was kind of scary.  I’ve always thought that Jay-Z was a lucky man, but that photo…

Lena:  I did, I saw that photo and didn’t know who it was at first.

Hasan Minhaj:  She was unrecognizable.  You know what, I’ll spin it in a positive way.  I think that is encouragement for all women.  Every time someone is feeling like they aren’t pretty or feeling crappy, look, even Beyonce has off days.  I don’t know what it is but she looks really, really angry in that picture.  I see that as encouragement.

Lena:  Is it wrong that we enjoy laughing at other people’s failures so much?

Hasan Minhaj:  This is my thing; I’ve debated that a lot.  We are making fun of a lot of stuff that happens on the Internet and this is the crazy part, people upload these pictures willingly.  For example, we have a segment called “Jersey Sure” where we make fun of a lot of people that GTL all day long, guys with faux hawks and mohawks, piercings, tattoos, for making duck face, and I’m thinking, should I be making fun of this person but this is their profile picture.  They uploaded it willingly thinking, “Hey, I’m killing it right now.  Let me put this online so everyone can see it.”   In that case, I don’t care about that.

Lena:  They are doing it to themselves.

Hasan Minhaj:  Totally!  We have our audience re-creation videos.   They are going to re-enact the things that people have submitted.  We don’t go searching for it.  There are some other shows that bash celebrities. They will have a celebrity with their kids and to me that is mean.  They try to find them in a compromising position but on this show it’s a person like “Hey, this is me.”

Hasan Minhaj:  I’m also doing sketches with my sketch group, Goatface Comedy.  We are going to make all those funny, viral videos.  Look out for more Goatface stuff online and Failosophy on MTV.

Lena:  Are you going to be doing anymore stand-up tours?

Hasan Minhaj:  In the meantime, I’ll be performing at clubs and I’ll have all my stand-up details on my website.

Lena:  Since you do stand-up, I’m sure you’ve been heckled before.  Do you have any funny stories about that?

Hasan Minhaj:  I’ve never had a really bad heckler situation but the weirdest stand-up show that I’ve ever done was a welcome to college show. It was a welcoming show so I though it was all students but a lot of the students were in the audience with their parents because their parents had just moved them in and I asked the audience about the strangest thing that they’ve seen one of their roommates do.  One person said, “I walked in on my roommate having sex last night.”  I said that’s crazy and asked them who their roommate was and she points over to her roommate that was sitting there with her parents.  I don’t know how she pulled it off.  Your parents just literally moved you in with your IKEA bed and put your sheets on and you tell your mom and dad to go and kick rocks for a bit and a dude comes in.  You guys have hot and steamy sex and your roommate walks in on you the first day and says, “Hey, I’m Alicia.”  “I’ve seen a lot of you, Alicia.”  Talk about first impressions and awkward situations.  That was the weirdest situation to be in.  It was pure awkwardness, a girl calling out her roommate and the girl sitting there with her parents.  It was hilarious.

Lena:  You’re friends with Parvesh Cheena. I interviewed him about Outsourced.  He’s such a nice guy.  Are you going to do Squad 85 with him?

Hasan Minhaj:  He is a super nice guy.  We work so much on Goatface, that’s our YouTube channel and it’s kind of like a fulltime thing, but who knows.  There might be a collaboration coming soon.