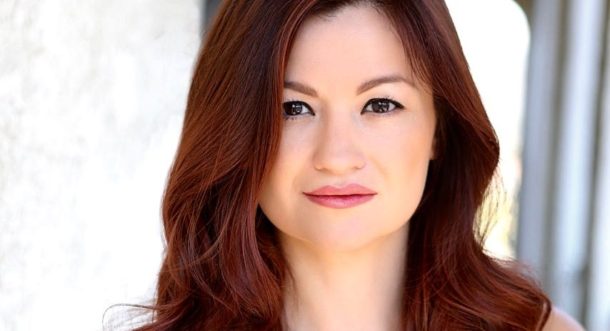 I spoke with Leah McKendrick about her film M.F.A., which will be premiering at SXSW on March 13th. Leah wrote, produced, and stars in M.F.A. She talked about working on the film, what’s next, working with the cast and director, and so much more. Leah stars alongside an incredible cast that consists of Clifton Collins Jr., Francesca Eastwood, and “the greatest actor”* Michael Welch. Don’t miss the premiere of M.F.A. at SXSW on March 13th.

LL:  I’ll just start by saying that you know how to cast a film—Clifton Collins Jr., Michael Welch, Francesca Eastwood… Let’s start by talking about the phenomenal cast that you’ve assembled. How was it working with them?

Leah McKendrick:  Aren’t they great? I got really lucky. It was amazing. They are all really talented actors and they take their work very seriously. I think as a writer and producer that you really want people that are going to bring their A game. They are three really talented humans. I’m really proud of their work in the film. Our casting director was the wonderful Arlie Day.

LL:  I interviewed Clifton last year, about another project, and he’s just an amazing actor and person.

LL:  I always welcome people to send in questions for the actors that I’m interviewing. Someone that may or may not be Michael Welch really wanted me to ask you a few things.

Leah McKendrick:  [Laughing] Okay, may or may not be.

If you were stuck on a boat with Michael Welch, and any other person, why would you choose to save Michael? Is it his humility?

Leah McKendrick:  Am I sure that I’m going to save Michael? I’m required to save Michael? [Laughing] I would really like to save him so he could tell me more stories about making Twilight. The last time that I saw him we were working. He was starting to tell me about what it was like to make Twilight and I really wanted to hear more about that.

LL:  Do you have a top seven list of your favorite Michael Welch performances? Please be as detailed as possible.

LL:  Z Nation was my favorite.

Leah McKendrick:  Oh, yeah! He’s, kind of, all over the place and that’s neat.

LL:  I definitely think that the person that may or may not be Michael Welch will be very happy with your answers. [Laughing]

In case people don’t know, you wrote, produced, and star in M.F.A., which will be premiering at SXSW on March 13th. What can you say about the film and the characters that we are going to meet?

Leah McKendrick:  The film is about an art student that becomes a vigilante after being raped. She begins, sort of, avenging college girls whose attackers walked free. It’s a revenge thriller but it has a super big issue that we are tackling through the lens of a revenge thriller. I hope that it can make you laugh and cry, but really hopefully it will make you think. That’s my hope.

LL:  Can you talk about working with the director the film Natalia Leite?

Leah McKendrick:  Nat is super hard-working. She cares deeply about the film and everything that she does. She was the only person that could have directed this film. I feel that really strongly now after being in the trenches with her. It was meant to be. She surely is a visionary. I think she’s going to win an Oscar someday.

LL:  I’m sure while you were writing the story, you were envisioning how it would be brought to life on-screen. Can you talk about how the final version of the film represents your vision?

Leah McKendrick:  The film is very different from my original vision. There are moments and parts that are exactly what I imagined. Marlon Young, who played the professor, is probably exactly how I would have loved and imagined. It fulfilled all of my wildest dreams for the role, which is a really special thing for me. I think your vision always transforms, and I think that’s a good thing. It becomes a collaborative process and sometimes what you initially envisioned isn’t necessarily what’s best for the film. It can also be really heartbreaking as a writer. It was for me at times. To see things transformed and you have to let go of what you thought you wanted in order to make space for other possibilities. It’s been a really big learning curve for me of not being so attached to the original idea that I had in my head—to just being more open and flexible to the possibilities when you have actors and other artists, filmmakers, and a director that has a vision of her own.

LL:  What are some of the challenges of writing and starring in a film?

Leah McKendrick:  It can be hard because you’re wearing a lot of hats. Sometimes you do a lot of rewriting on set and you can’t always just focus on the world of your character. That can be tough, but more than anything I think it’s just an advantage, as an actor, to know your character because you’ve spent so much time with your character while writing it. I always recommend to all actors that they should be writing and they should write their own material. I think it’s really empowering, challenging, and rewarding.

LL:  Are you going to be having a Q&A with the cast at the premiere?

LL:  What are you looking forward to at SXSW?

Leah McKendrick:  I just can’t wait to share the film. It’s really crazy for me because I wrote it and it’s been my baby for a couple of years now. There are so many steps from the journey and to finally get to share it with the world—I just can’t wait. I really hope that people connect to it. You just have no idea until people can actually see it. It’s been like Fort Knox with our film because it’s not done yet. I’m just going to have a glass of champagne and hopefully people tell me that they liked it.

LL:  For the people that can’t make it to SXSW, do you have a release date on when it will be available and where?

Leah McKendrick:  Not yet. We have to sell the film. When we get a distributor that will be when the news will come out about where it will be screening and when it will be released. Stay tuned!

LL:  Are there any other films that you are looking forward to seeing at SXSW?

Leah McKendrick:  I really want to see the Judd Apatow film. I’m a really big fan of his. We had a SXSW orientation to meet other filmmakers and see their films. There just seems to be so much cool stuff this year. A lot of cool content and female-focused and female-driven stories. Those are obviously very close to my heart, so I really want to support those.

LL:  Are you still working on music?

Leah McKendrick:  My next project is, sort of, a horror musical. It’s a pilot about an underground burlesque club in New Orleans where it’s actually run by a coven of witches. After M.F.A., which was honestly pretty emotionally charged and draining for a couple of years, being very devoted to telling the story right and being effective at the same time factually correct and accurate. After shooting it, and going into post, this was like the second project that whatever I make I really want it to be fun, sexy, and empowering to women—the way that I hope M.F.A. is but in a very different way. M.F.A. is a really tough subject. I just want to go to a fantastical world where there are witches, music, dancing, and I can wear lingerie. [Laughing] That’s what I want to do next. When it gets made it will be a return to my roots as a musician and a pop singer.

Leah McKendrick:  It actually stands for Master of Fine Arts, but I’m telling people that it stands for Mother Fucking Assassin. She’s an art student and she’s earning her M.F.A. as she’s creating her thesis exhibition is when she finds inspiration through her vigilante justice.

*This statement is 100% confirmed. 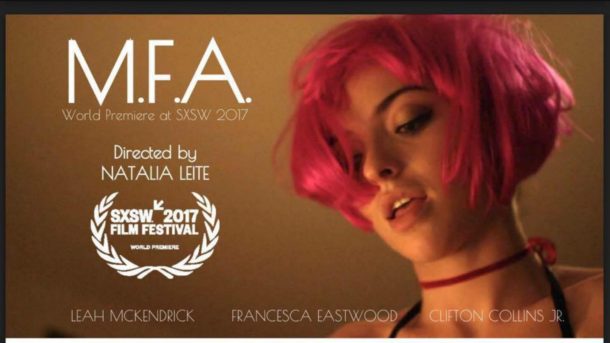